11 Nov The s(l)aver of Manjula

Posted at 16:10h in Spirituality & Psychology by alcala 1 Comment
0 Likes

“Manjula’s uncle was lucky, he found a job sewing my clothes.

He easily got used to sleeping on the floor of the factory.

However, her brother couldn’t hold it much longer and escape from the assembly line after finishing my smartphone.

He jumped through the window.”

I WILL BE A S(L)AVER UNTIL THE SLAVES CAN HAVE SLAVES.

Okay, I am not going to be politically correct and looking at Brasil and what happened with Trump, I have to admit, that political impoliteness actually works. Besides (a side thought is a not very Trumpian practice, by the way), I will add that I am learning to only join debates that I can lose, i.e. learning something. Because when I am having a debate that I know I can win, I either turn in condescendence or anger produced by the impatience of both, me and my interlocutor. Really, sometimes it looks like people don’t want to understand things. But that is too much of a side thought. We can deal in the future with that.

So, to the point:

“Have a Manjula in your house”.

So, from the previous command, could you guess whether I was asking a human, or commanding it to a machine?

In 2018, we have been able to take another step towards comfort. Observing history, comfort has been always connected to slavery. Thus, if we want to have comfort in the future, we need slaves.

Back on the days, when we were entering the era of computers, everyone assumed that all the tasks would be facilitated by laptops. That would give us lots of free time. Well, you judge it.

Indeed, you are probably a very lucky person if you actually find time to read this.

If things are going to keep on growing like this, in 7 years we’ll be much more connected, and much more forced to sacrifice our free time. Thus, we will not be able to have the exclusivity of doing our own orange juice when we arrive home, light some candles, burn incense, open a ‘Google Docs’ file, and put some water on the table. So, we either need slaves to do that or find the time. I prefer slaves, so I can find the time to meditate for one hour a day.

Let’s start with the euphemisms. (Check the etymology of ‘eu-fonos’. Etymology sounds phenomenal on tele-phone. But not on smart-phone, since the sound is not smart. The smart is the phone.)

I envision Manjula in my future, as a human being.

At least now, with my 2018 mindset. One of the reasons I want to earn money is to have a house-worker.  Since I don’t see myself making millions, I imagine cheap labor workforce as a solution; e.g. an Indian woman from a low caste living in a suburb. If you are already disagreeing with me, (which is a good thing to do): take a paper, take notes, and keep on reading. Remember, I only join debates that I can lose.

cheap labor workforce, or slavery, just to mention the cheapest workers, allowed higher levels of comfort, not only to the privilegde, but also on the long, middle term, to the children of the workers who integrated as equals in the society. This trend had accelerated, like every other social change, in the lasts centuries. What used to be generations of slaves in the Roman Empire, and centuries of social stratification in the middle ages, it lasted only 300 years in America. (That “only” is going to cause me troubles.) But yes, compared with the thousand years that Middle Ages lasted, 300 is less than a third. Thus, if we can have enough vision to see that we, WEIRD (Western, Educated, Industrialized, Rich and Democratic) people are quite privileged, maybe, we can take some cheap labour forcework, making our lives easier, and making the lives of the future generations of the non-privileged easier. (Now, it is colonialism, paternalism, and many other -isms that I hope many readers are writing on their notes. By the way, thank you for reading if you have gotten this far 🙂 ).

The thing is that I really mean it.

I think it is easy to speak about egalitarianism in a world level, mentioning figures about poverty in third world country (outdated)/underdeveloped (soberb)/in developing ways (euphemism)/struggling countries (imprecise)/historically exploited (sounds kind of truthful, isn’t it?). So, I assume that people that have visited these historically exploited countries have seen that poverty is not just a word, but a reality. And it is a harsh reality. It means living on the streets, it means boiling the water before being able to drinking, it means bad sanitary conditions, it means undernourishment, it means shorter life expectancy, it means child mortality, it means suffering. Yeah, it is this simple, poverty means higher levels of suffering. And that is all. If you want a working definition, use that.

Therefore, considering that morality is defined by the intentions of reducing suffering.

Why bringing a family from the slums, and have them working at your place wouldn’t be moral?

(Please, if you haven’t taken notes yet, trying to answer this question is a good moment to start.)

A family in the slums is suffering more than what they would suffer doing your house working. This is practically undeniable. You have the Internet to inform yourself about this. You have a comfortable place to sleep; drinkable cold, and hot water in the tap; and direct access to electricity. So, before coming up with all your previous notes about my paternalism, colonialism, or whatever the -isms, consider your reticences for taking a family out of the slums and give them a job at your place.

Manjula could be the name of the mather. Keeping the slums on mind, I bet she would be quite okay with waking up at 2.30 after I tell to my phone “Manjula, prepare me an orange juice, because I am arriving on 5 minutes”. This way, I could get a wonderful freshly pressed orange juice waiting for me with all the vitamins still un-evaporated. (In Spain is common to make grandchildren drink their orange juice fast because of the unquestionable knowledge of their grandmothers about chemistry).

Manjula would wake up, make the juice, and go to sleep.

I think it is better to wake up and pressing some oranges than finding out that your entire house was destroyed by a flood and dead rats are floating around the place that used to be your kitchen. (You can add “demagog” in your notes, as my chemistry teacher called me in the high school. Sorry, but he was 10 years faster than you.) If you think I am demagog, well, travel and see. 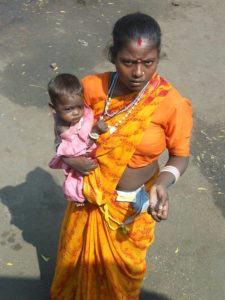 At this point, you can either agree with me or come up with a better solution. A factual solution. It is very easy and cheap to come and say, equality of opportunities, developing infrastructures, right of having access to clean and drinkable water. Look: blah, blah, blah. Even more clear: Blah. Blah. Blah.

Talk is cheap. It is so cheap.

If people would be asked for money for each thing they say, they would be forced to think twice before speak. (God please, don’t take my words against me. I am addicted to moving, talking, writing, thinking, and meditating – from lower to a high level of addiction). Anyway, I think I would pay for spreading this text. I think it is relevant enough.

As the overquoted Ghandi supposedly said:

“Be the change you want to see in the world”.

Probably paraphrasing Jordan Peterson: “If the world is Hell, it means that you haven’t make your impact on it.”  Be like Jesus Christ. Die for all the sins of the sons of God, so you can resuscitate. Then, ascend to Heaven. Be like Buddha, go over all your previous lives, disattach from your own self and being. Then, spend all your following breaths helping people to be free from suffering. Be like Mahoma. Spread the Truth. Be like LaoTsu. Speak. Then, deny words. Or be like Fluito, and mix a bit of each them in your being. Believe me, you choose.

So, if you are not convinced yet, I am really looking forward to hearing your thoughts. I cannot come up with a better solution. Me, Carlos Alcala, a youngster of 26, expecting to have a certain amount of money in 5 years time, it is the best I can do. I can argue about different political actions. As well, I can collect figures about poverty and developing countries. I can portray examples of the sorrows that these people suffer. Mention the innovations that are making their lives brighter.

But, a direct action that I can do in five years time, is to “s(l)ave” a family.

So, not only the kids, but the whole family, will live in better conditions in their near, medium, and long future. I wrote “s(l)ave” on purpose. “Adopt” sounds naif. I feel like being politically incorrect. You know, human rights are going to be there. Just respect their dignity. You would be doing way much more for their human rights than whatever the politicians, figures, and examples have done for them.

At this point, I could face the second aspect of the question, the less sociological, and more technological one. What if instead of Siri, Alexa, or Google, we have a Manjula that can cook for us, light the incense, and put the bottle in our desk. We already have one that can open a new file in the word processor while we are arriving home. It’s just a matter of physicality. Considering that the price of the chef-robots will decrease in the following years, is it more moral to buy a cheap robot, or to “s(l)ave” a family?

(I invite you to re-read the first lines of the text, in case you didn’t realize that the family of Manjula is already working for us.)

With delusions of grandiosity,